Sunday posed perfect weather conditions but terrible snow. And this is quite a pity because with such a certainty of good weather it would have been one of those days when one attempts to long -in time and lenght- trails. Since that wasnt a clever choice because of the snow and tried to at least look for where the better snow was. The result was this summit in the north side of the tunnel between Aragnout (France) and Bielsa (Spain).

I woke up quite early -in this sense was good to have slept in that picnic area- and started tracking up at half past eight. The snowpack was hard but Sun was already shinning in the main slope of the descent. By the way, the trail was easy and fast. It reminded me of many days in the Cantabrican mountains where many times you just see the peak from the car. 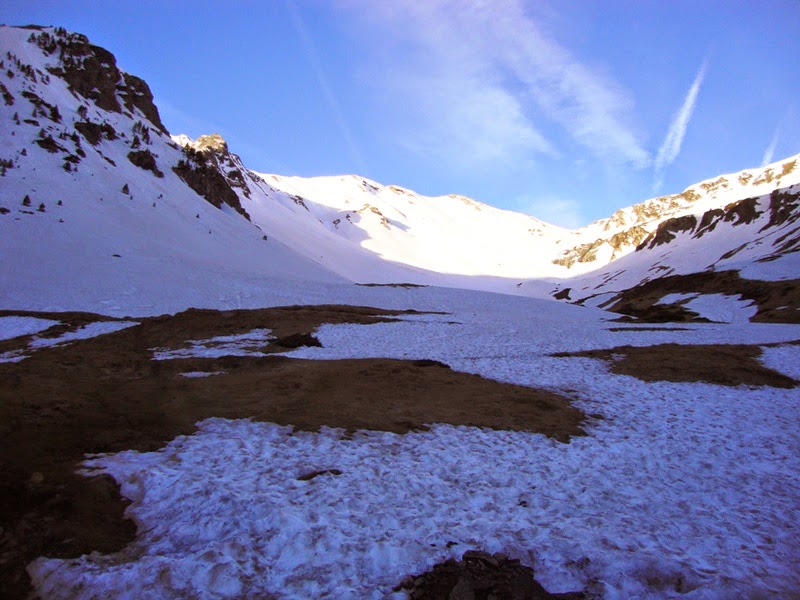 I skip more pictures from the valley, since it´s easy to picture where I went over. I had to do on foot the last meters of the ridge. 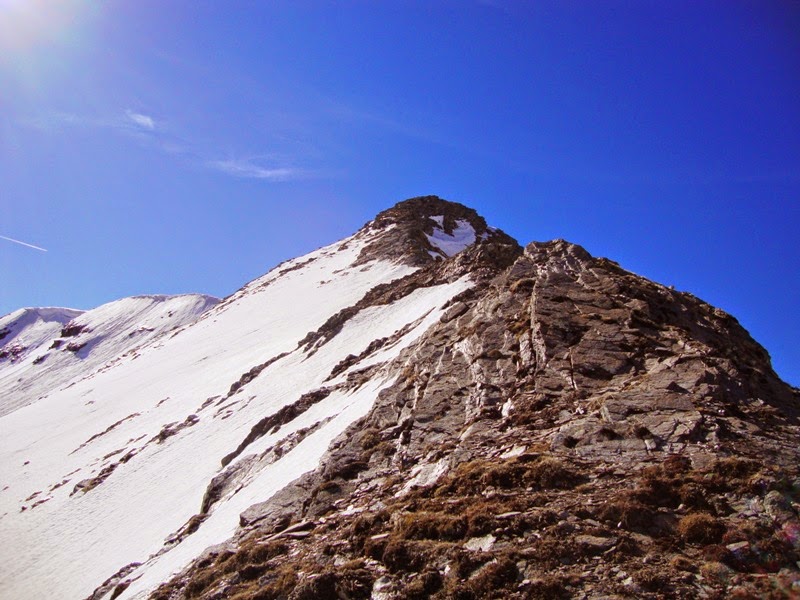 No big views from the summit except for this rocky walls. I think Its the Tromouse area. One of the valleys which lies paralell to Gavarnie. Its amazin how close I was both days to Gavarnie but how far it is by car. It would have taken 2h If I had wanted to go there . 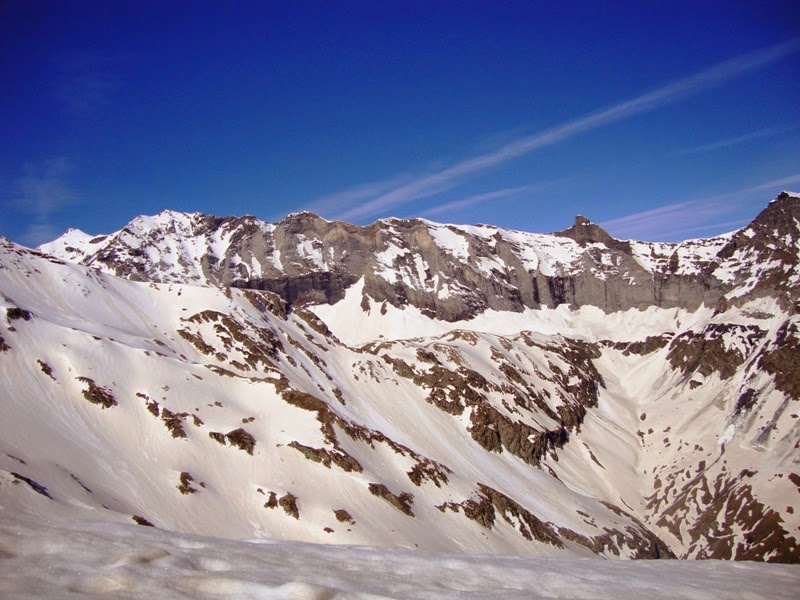 As many places on intertet says: short but good and fast descent. The first slope was fast and steep and still with not as bad  snow as the previous day. 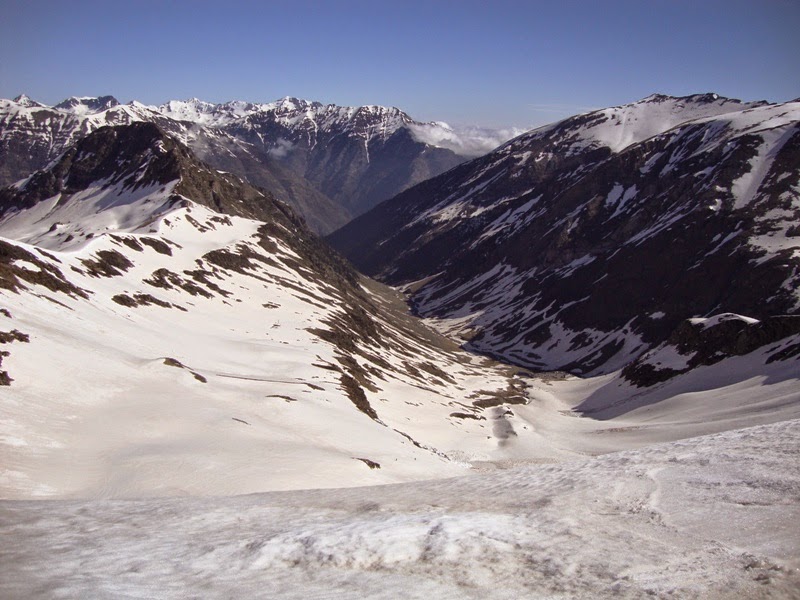 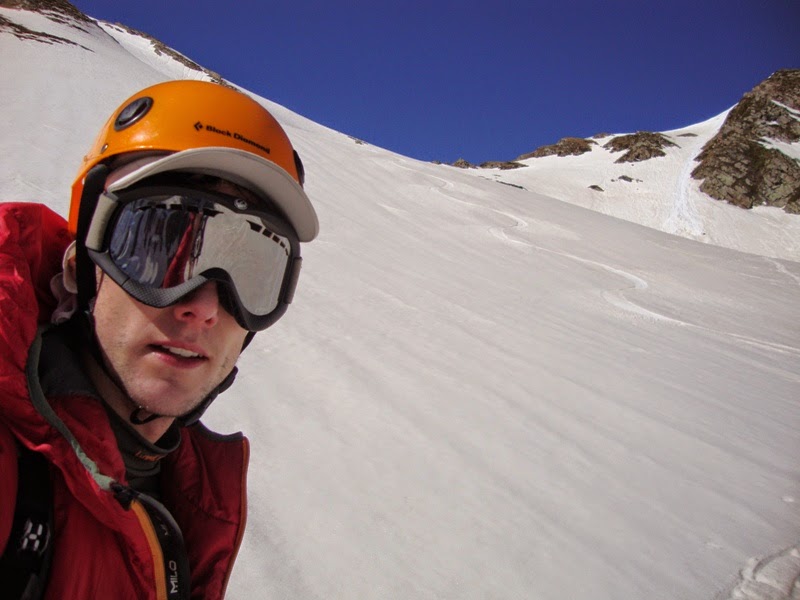 What it was left after the good slopes! The car was just down there waiting for me. 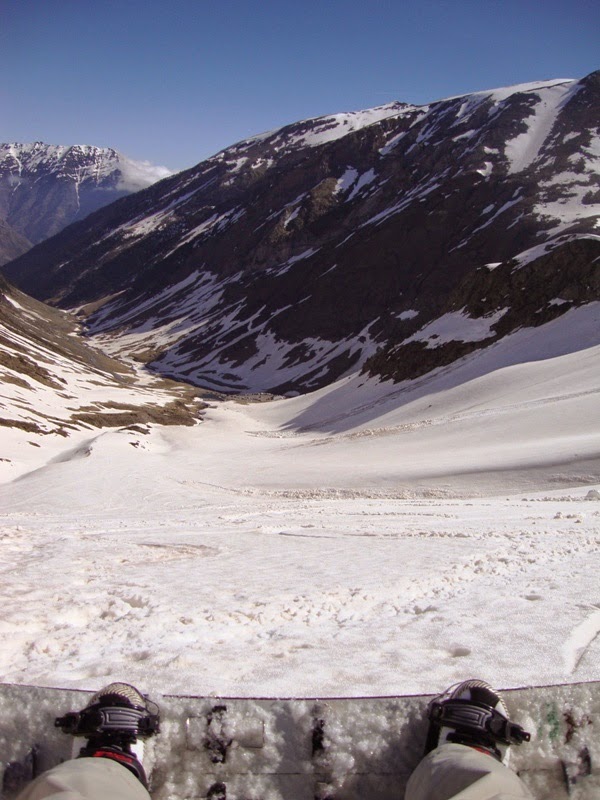 Somewhat bitter weekend.... Definetely the snow was not the best to enoy the descent especially on Saturday, just on Sunday I really catched "good" snow but too short slightly below 800m of vertical drop. Let´s see if May comes with greater ski days! But still, having  meal in Pineta valley was totally worthy!!

I closely followed the weather forecasts during the week. There were chances that a whole sunny weekend was thrown down the drain due to the storms...Finally it wasnt that bad, and just on Saturday there was some probability of cloudy weather but not storms in any case.

I decided to get to know this central area of the Pyrenees in the french region of Hautes Pyrenees. My idea was to go as far as Gavarnie, but I prefered to leave it for when I ll go to Vignemale first. So Soum des Salettes posed the best ascent for April around Saint Lary and still close to Spain.

This summit is all a classic in this part of the Pyrenees. Its almost a 3000, has good slopes for the descent and the access by car is easy thanks to the ski resort. Despite it let me say that the place is quite awful and the ascent pretty boring.

The summit at the background can be seen from the parking. 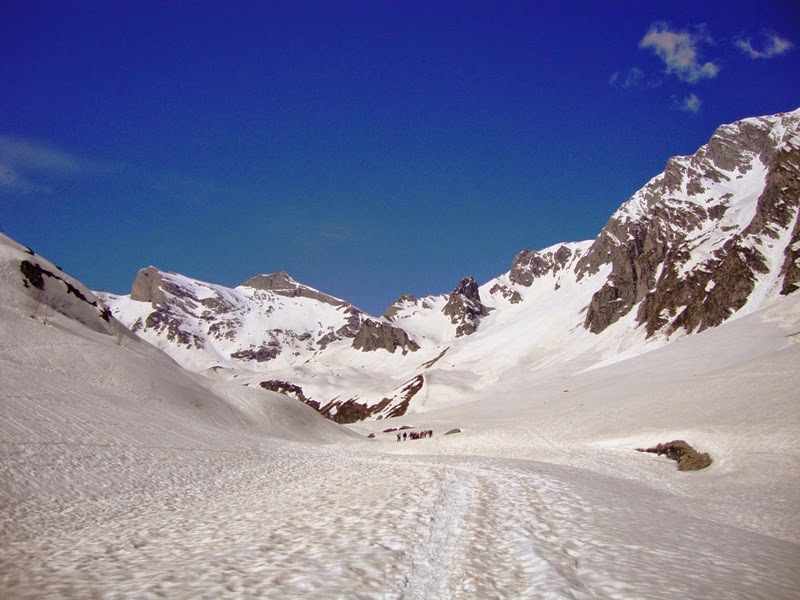 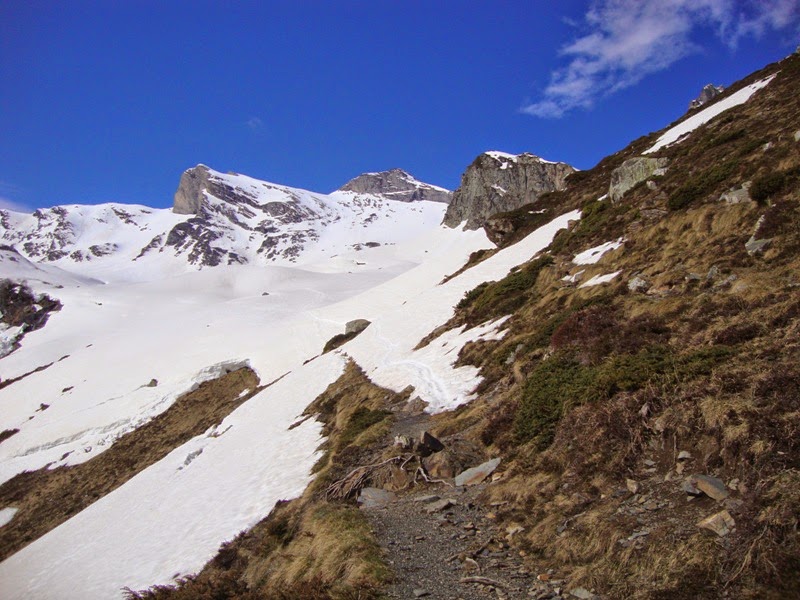 After having gone over the valley I turned right to reach the coll of Campbiel. It was pretty hot and this was the hardest part especially with the Sun working on your back...Good I was determinant to come here (and was easy to skin up :P). But my surprise came next... 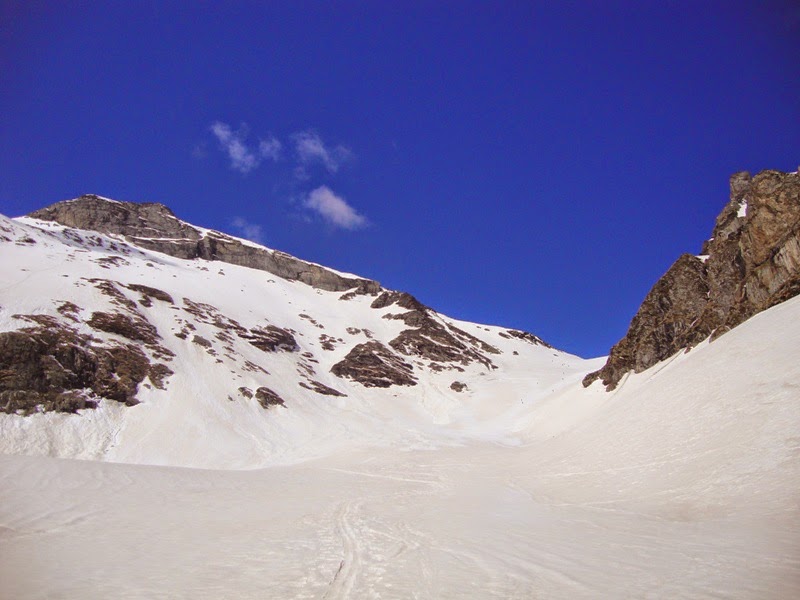 Yes....there is no snow from the coll to the summit....and we are talking of more than 300m. How is this possible? And more important, what did it happen when I came here?? ja-ja

Well, let´s adapt to the new situation and get opened the trekking season! So, from 2550m to the top a handful of skier and I did the rest on foot. 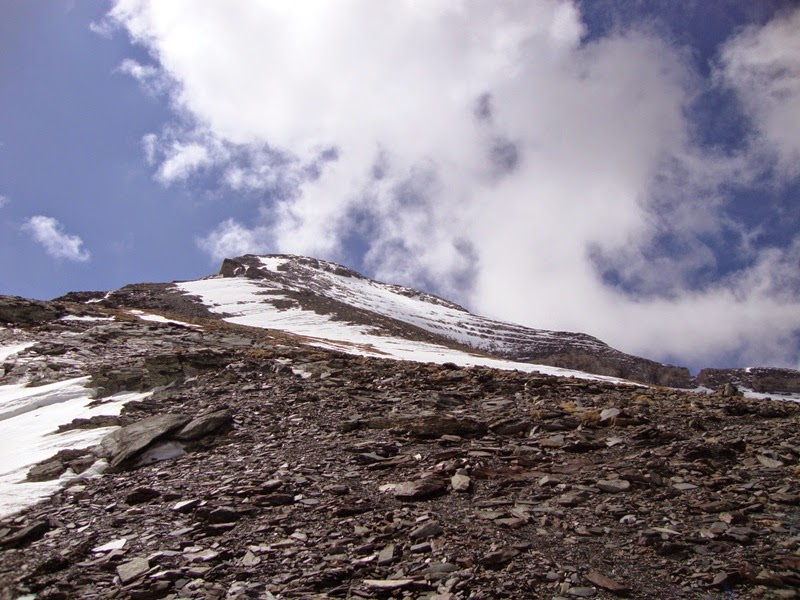 Come on...the last thing I needed was not to enjoy the views from up there... 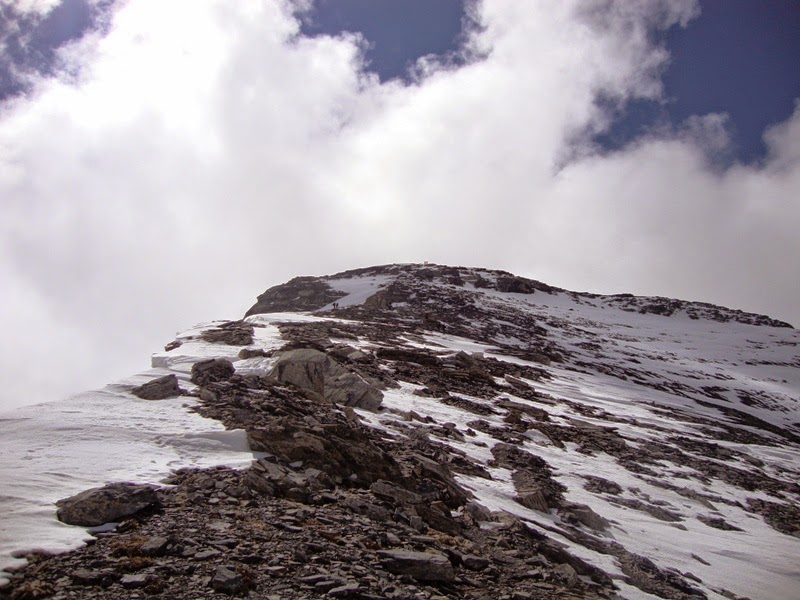 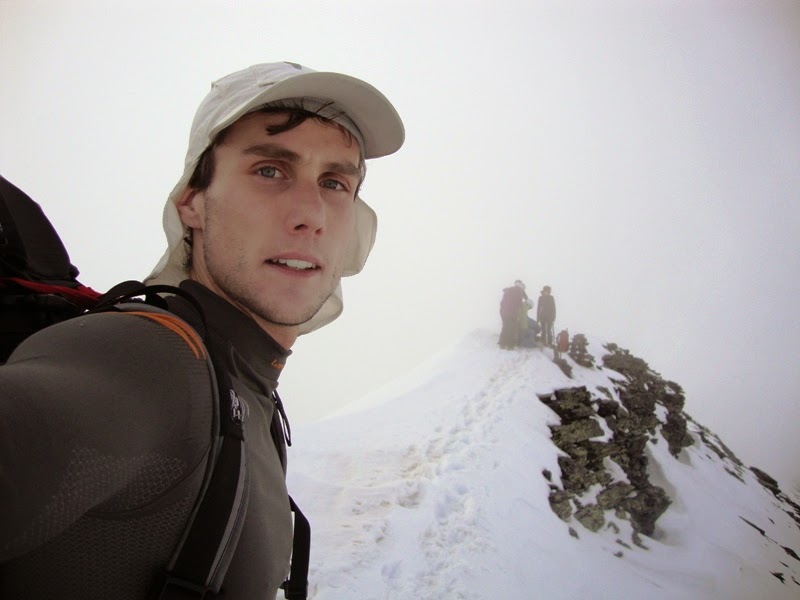 The descent wasnt bad up to the place I turned right. From that point is when you said, you wont be splitboarding again. A combination of quite flat terrain, together with shitty snow and skin´s adhesive sticked to my board led to a very bad "descent". 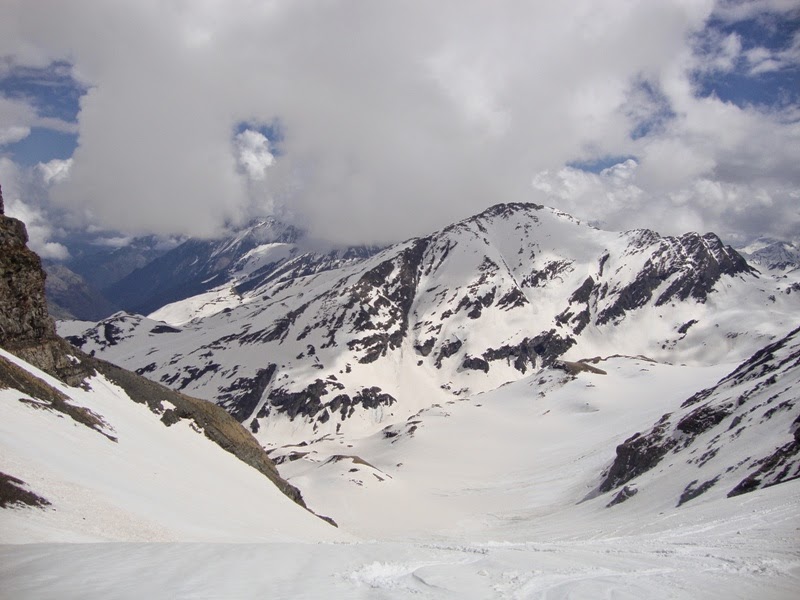 Back to the car after 1200m of altitude difference that is not that much and was already tough! jaja

I left France with unknown destination. There arent many options here, I went to Pineta valley, just because I liked the place. I had dinner, chill out and sleep in this spot at the side of the road. Maybe the only thing in the day that turned out being really good. 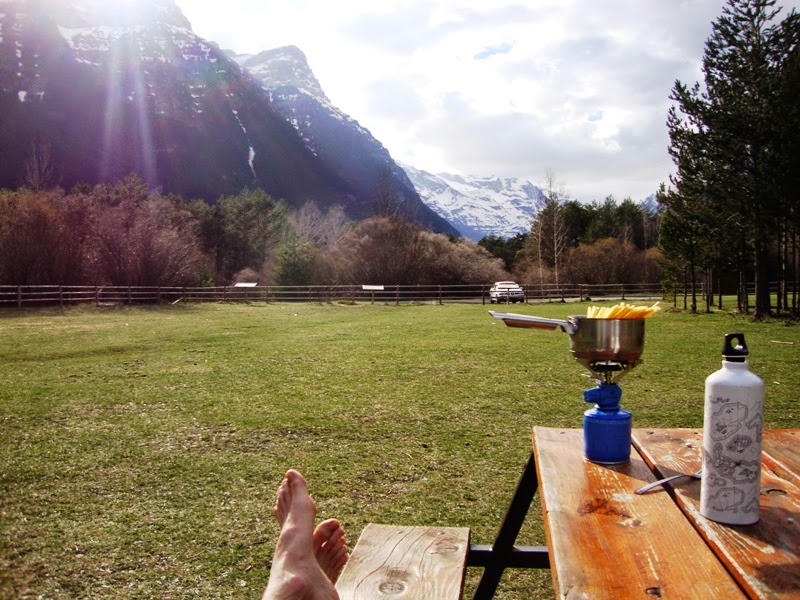 Some solitude by the river in this still quite wild place in the Pyrenees. 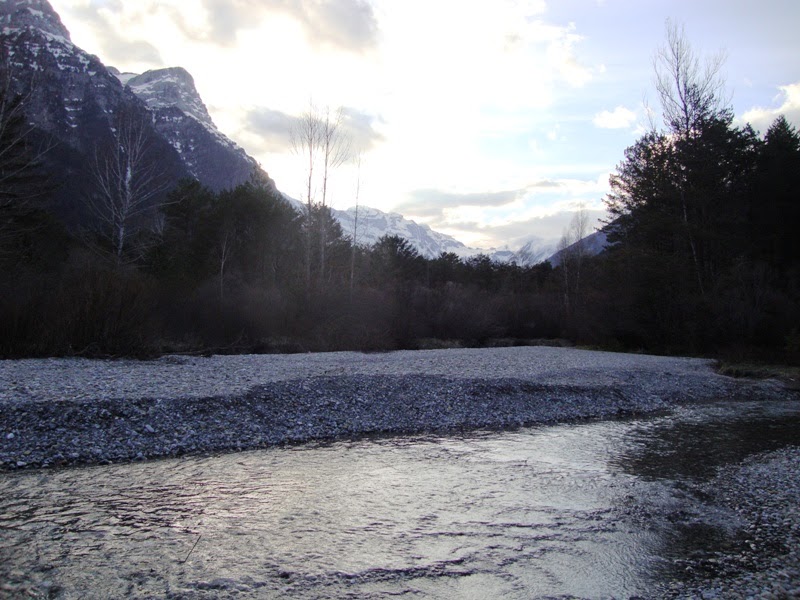 The following day I ended up going to one of the two summits that are usually skied in the north side of the Bielsa tunnel so I can give this zone as visited.
Publicado por Carlos No hay comentarios:

After spending Friday and Saturday in Barcelona, I left Barcelona on Sunday early in the morning to make the most of the weekend. It had been snowing in the previous days and the temperatures rose fastly right after. The risk of avalanche was quite high because the new layer of snow didnt bound to the old one.

I went to a riskless peak in "coll du puymorens". This zone lies between Andorra and France. It was my first time here, although I had been to Pas de la Casa many times which is quite close to this spot. I didnt want to mess myself up in a longer trip because I was testing a pair of new boots and attachings.

The goal is on the left-hand side of the picture. 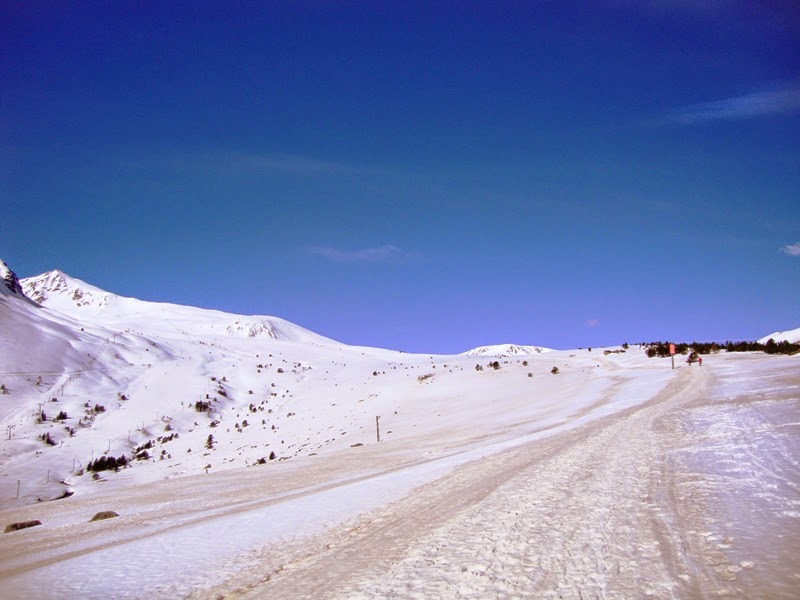 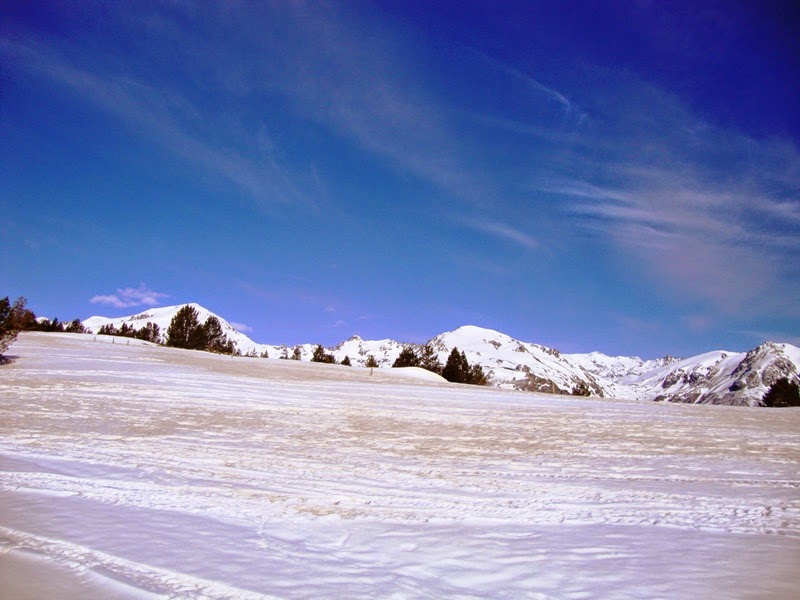 Despite April is being anormally hot, this still provided a good sign of how snowy the winter was. 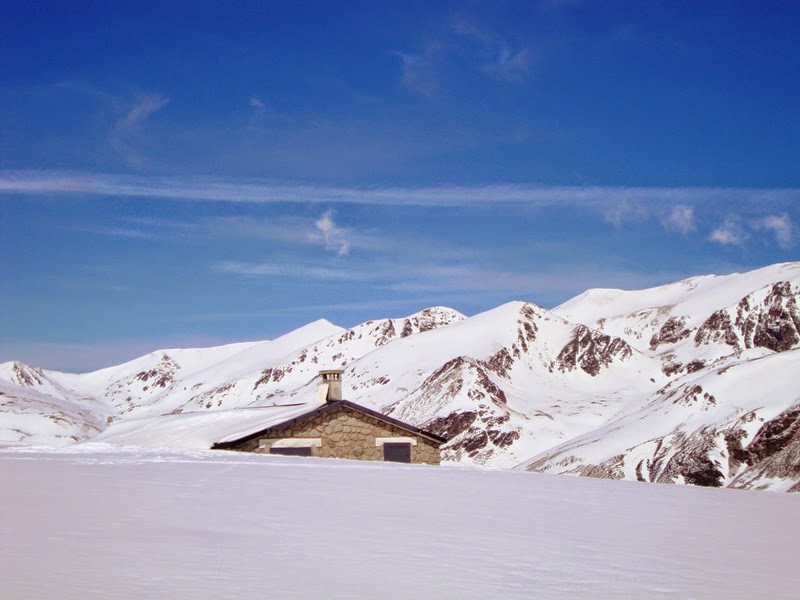 Better snow than I thought. 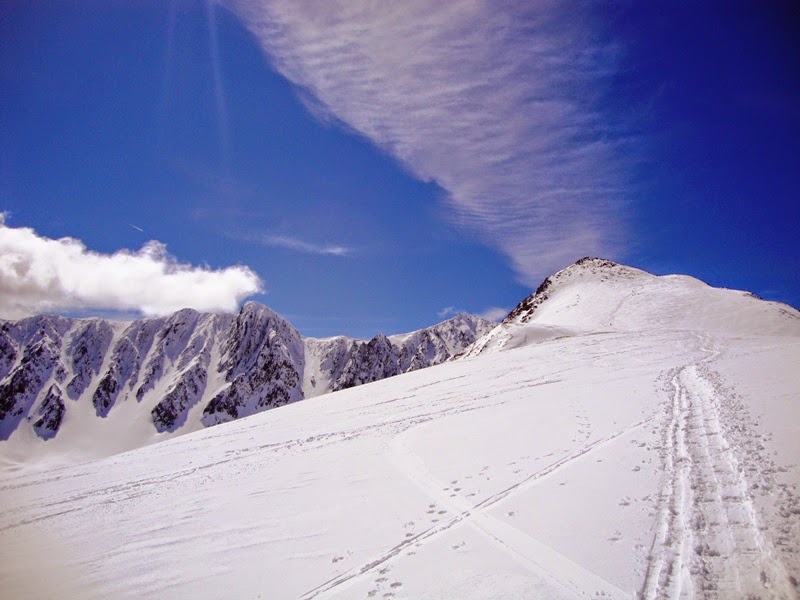 Oh perfect! The last meters must be done on foot. Good to test my semiautomatic crampons on my boots, and also good to break the samey ascent. 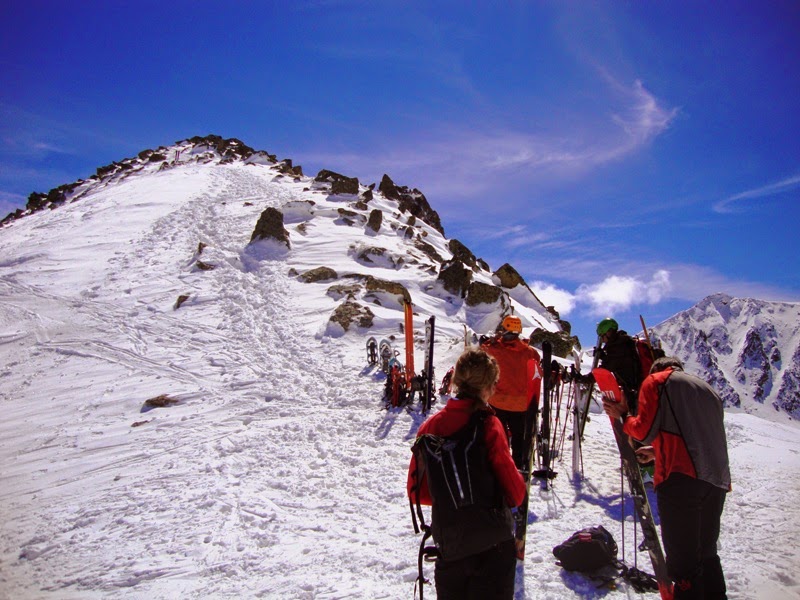 And summit in less than a couple of hours. There was a bulk of people up there. Hearing French up there reminded me of some places in the italian Alps where was normal to come across French people. 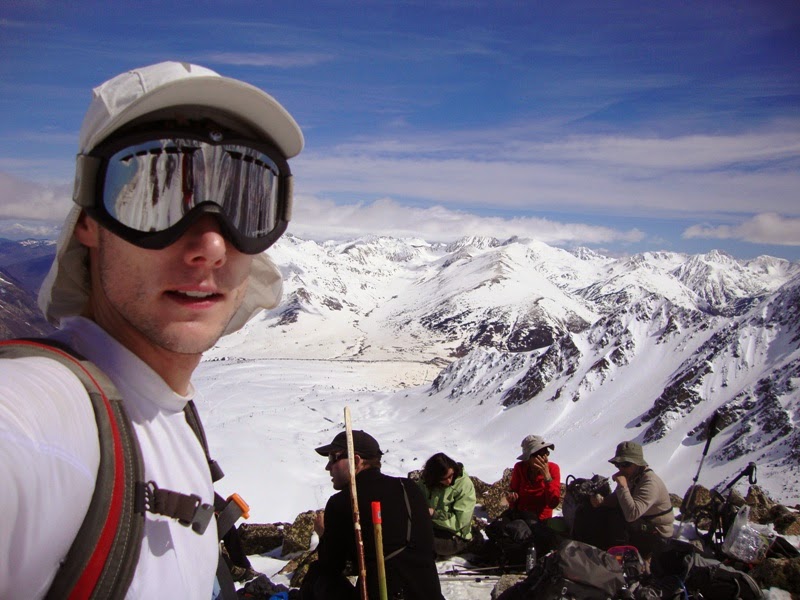 Step by step to go down. 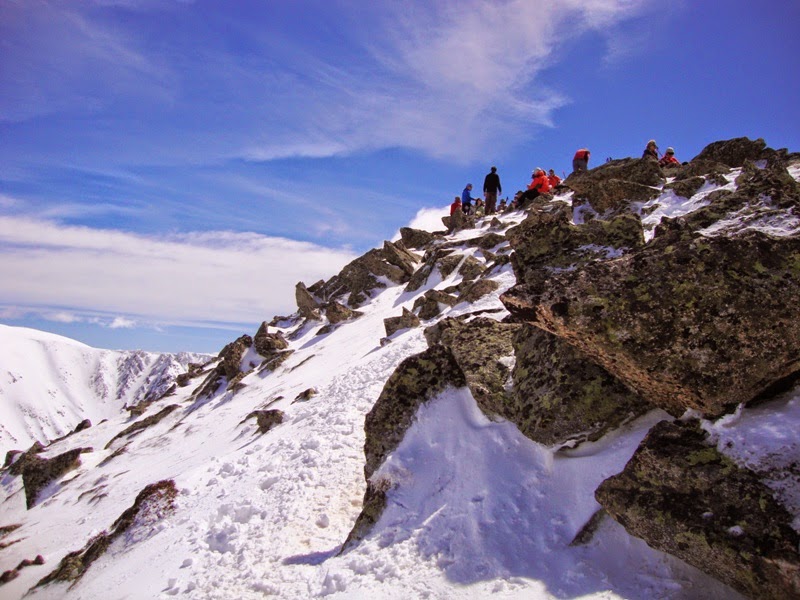 And the descent, which was good in its first part but then it flatted out too much and became something I wish I had skipped of the day! 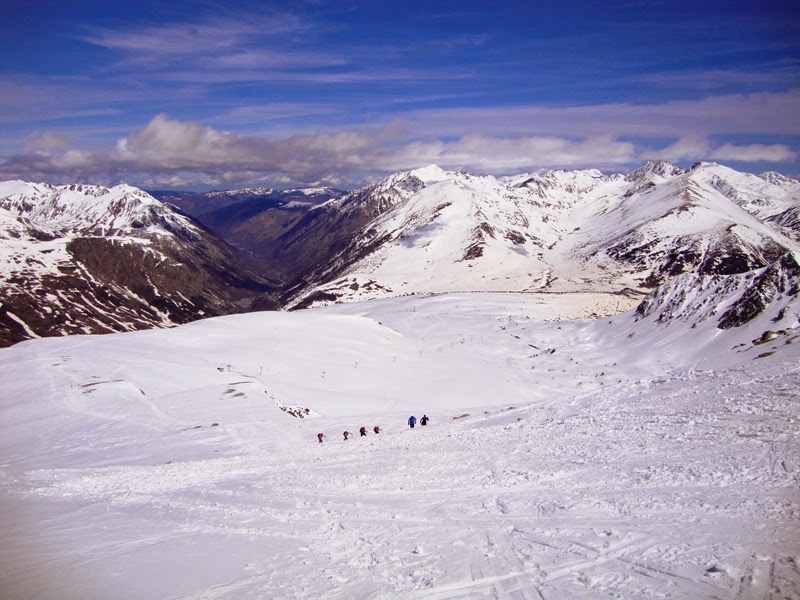 Not bad for finishing up the weekend. Easy place and numbers, just +800m.

Little by little I am visiting more and more places here in the Pyrenees.
Publicado por Carlos No hay comentarios: